Showing posts from November, 2012
Show all

When our bodies betray us...

When our bodies betray us...How to break through the emotional bonds of chronic illnesses.
Post a Comment
Read more

A Gentleman and A Warrior - A Veteran's Day Tribute 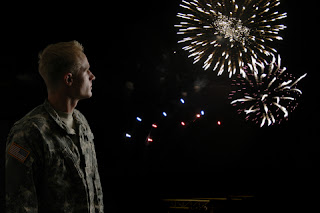 Three years ago, I had a relatively brief but incredibly inspiring conversation with a stranger who instantly became my hero .I was at the San Diego, CA Airport waiting for a flight when the only seat available in the overly-crowded waiting area was next to a young, tall, impeccably suited Marine. I slowly walked over looking to see if perhaps a buddy or two was with him before asking the Private if the chair was taken.  He politely answered, "No, mam, it is  not. Please sit down." After arranging my coat, computer case, and purse, I eased back into the black and metal seat. I glanced over at the young man next to me.  He was leaning forward with his elbows resting on his knees and his long fingers were carefully nestling his hat. He was staring down at the floor for long periods of time, and then he glanced upward when a flight attendant's voice rang over the intercom. Risking that I might be interrupting his thoughts but wanting to say something to this brave soldier,
Post a Comment
Read more
More posts